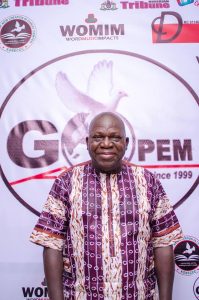 “Will You not revive us again, that your people may rejoice in You?” (Psalm 85:6)

If there is one Nigerian whose life spans the rise of the Nigerian Charismatic movement and the emergence of modern revivalism and who has been deeply involved in both of those movements it is Dr. Mike Oye. Born in 1939 and now in his eightieth year, Mike Oye still tirelessly travels the length and breadth of Nigeria and beyond in the same quest for God, revival and holiness. They are the same issues that have motivated him for over fifty years.

Mike Oye was born and raised in Ghana, though of Nigerian parentage. He arrived first in Nigeria at the University of Ibadan, in 1962, which was the year it became a full-fledged university. It was at the University of Ibadan that Mike Oye nurtured his life-long interest in agriculture, eventually leading to a doctorate. His advocacy of small-scale farming and holistic nutrition and health products for both ministers and laity has remained a strong focus throughout the past five decades.

However, nothing else in his life has superseded Oye’s passion for the preaching of the gospel and the reviving of the spiritual dead bones within the Church. When he arrived in Ibadan in 1962 he had only very recently experienced new life in Christ. He had been reared within the Roman Catholic Church and in his youth had wandered off to the Jehovah’s Witnesses and eventually into eastern religions. Everything changed after a young girl witnessed to him, followed by an encounter with Jesus, on his knees, in the middle of the night.

Now at Ibadan, with the fire of God burning in his heart Oye got deeply involved in the revival movement that was beginning to burn during those earliest days of the Nigerian Civil War Revival. Northern students such as Ishaya Audu and Reuben Ariko had already become strong supporters of revival fires at the university. Oye quickly joined them and eventually moved to the forefront. His testimony is that he began to read every book on revival and holiness that he could find, many of which were being disseminated through the Scripture Union. He read every book he could find by Oswald J. Smith, for example. He testifies that he was baptized in the Holy Spirit in 1964, after reading Smith’s book, The Man God Uses. He eventually became the president of the Intervarsity Christian Union (IVCU), which was the more evangelical alternative to the Student Christian Movement (SCM).

In those early days of the moving of the Holy Spirit in campus revival there was no sense of either denominationalism or tribalism. It was only in later years that people began to divide themselves into Pentecostal and non-Pentecostal groups. Holiness and love were the two strong pillars that undergirded the campus revival. The thrust for evangelism both within and outside the campus was remarkable.

Many of those undergoing revival had been nurtured during their secondary school years by the widespread and growing ministry of the Scripture Union. At the university those same people now came under the influence of several godly British lecturers who were intent on evangelizing their students. To this day Mike Oye loves to recall the names of some of those on-fire-for-God lecturers, such as John Powell (organic chemistry) and David Palcott (agriculture).

A major development that thrust Mike Oye into the revival field was his appointment as the first indigenous traveling secretary of the Scripture Union, where he served from 1966 to 1972. In that capacity God used him as one of the most powerful human instruments in the spread of the Civil War Revival. His impact in western Nigeria, eastern Nigeria and even northern Nigeria in taking the fires of evangelism and revival primarily into primary and secondary schools, but even into tertiary institutions, was unprecedented. In school after school great revivals broke out as classes were disrupted in order to allow students to seek the face of God and rejoice in their newfound spiritual freedom (see my book, Capturing a Lost Vision: Can Nigeria’s Greatest Revival Live Again? for more details).

No one in Nigeria has more consistently pursued revival in Nigeria over the past decades than Dr. Mike Oye. He has many thousands of times preached a consistent message focusing on the fundamental issues of repentance and the new birth, as well as holiness. During his SU preaching days Oye made it his habit to quickly bring his audience to a live encounter with the issue of sin and repentance. He was unusually blunt in condemning sin for what it truly is, as the ploy of Satan to land people in a burning hell. In his own words, “I preached about sin, showing the consequences of sin. Our call was a call for repentance. I looked at and followed the teaching style of Paul, as seen in Acts 20, in public and private teaching from house to house, with tears.”

Mike Oye gained an early reputation as a preacher of holiness. He and Muyiwa Omijulo were like Siamese twins publishing that theme in the late 1960s and into the 1970s. In later years God began to expand Mike Oye’s ministry interdenominationally. Though he became a member of the Methodist Church Nigeria and for many years has led evangelism, church planting and revival campaigns within Methodism, Mike Oye has been a man that no one denomination could hold captive. In a similar vein to the Methodist founder, John Wesley, Mike Oye is a man who can credibly say, “The world is my parish.”

One of the greatest needs in the Nigerian Church today is for strong revivalists. These are men who know how to preach to the backslidden Church. They are men who can be counted on to call a spade a spade, but to do so under such an anointing of God that it is difficult to resist the power of Holy Spirit conviction that surrounds them. May God raise up in Nigeria more Mike Oye’s for the coming generation!